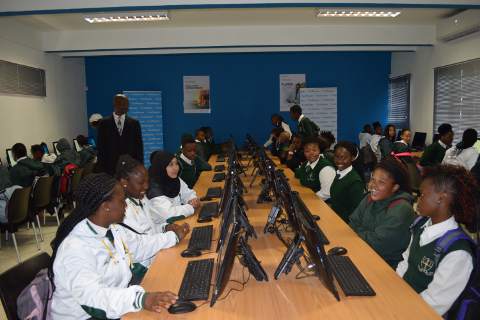 Mandela Day 2016 not only marked the beginning of the third term of school for the learners at Chris Johan Botha Secondary (CJB) in Bosmont, Johannesburg, but also the introduction of a new subject to the schools’ curriculum.

Learners from this school increased their chances of employability after matric when their school received a fully equipped computer lab. The lab is part of an initiative called the Melisizwe Computer Lab Project which sees big business partnering with schools by providing infrastructure which allows learners to study Computer Application Technology (CAT).

CJB Secondary is one of eight “no-fee paying” schools to be a recipient of the project. The aim of the project, started by SA Consulting Projects (SAC) in 2012, seeks to ensure that learners from indigent schools are given the opportunity to study CAT as part of their curriculum.
Principle of CJB, Mr. R Blend says the unfortunate result for learners at his school is that their opportunities are seriously limited due to the lack of computer training. “The implementation of the computer lab in our school goes beyond just giving kids access to a subject, it means that learners can now broaden their horizons, improve their research for school projects and learn additional skills that is critical to their growth,” says Blend.

Candice Kern-Thomas, director at SAC, says although CAT should form part of any school
curriculum, many schools are disadvantaged because of the lack of infrastructure.
“Learners from schools that don’t offer CAT are significantly compromised in the work place or tertiary institutions where the expectation is that they know how to use a computer making their chances of finding employment or being excepted to university that much harder,” says Kern-Thomas.

She says that Government has done wonderful work in terms of a roll-out of ICT’s in Education in the last few months, however, the tablets that are provided to these schools are not sufficient to enable the schools to facilitate CAT as part of their curriculum in terms of the Department of Basic Educations computer lab guidelines. This is the need that The Melisizwe Project seeks to address.

CJB Secondary’s Computer lab is sponsored by Software AG South Africa (Pty) Ltd and is the third such computer lab sponsored by the company. “We can’t depend on government only to solve the crises facing education,” says Kern-Thomas. “It is incumbent on big business, civil society, communities and schools to find solutions.”