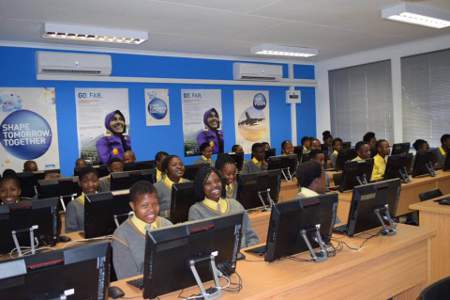 Learners from Namedi Secondary School in Diepkloof, Soweto will receive some Madiba Magic at the start of the new school term when they return to a brand new school computer lab. Mandela Day 2016 will open the door to learners who want to study Computer Application Technology (CAT) as part of their curriculum but due to infrastructure constraints were unable to.

Namedi Secondary is one of thousands of disadvantaged schools who are unable to offer CAT as a subject but that is due to change thanks to the Melisiwe Project which sees big business partnering with schools to provide learners with infrastructure. Principle of Namedi Secondary School, Mr JT Genge believes the school’s inability to offer CAT has stunted the growth of learners in the school for years, as they were unable to compete with learners from advantaged schools in the market place or tertiary institutions due to their lack of exposure to computer studies.

“Learners in my school are ecstatic to be receiving such a boost in their education. It will go a long way to improving their chances of employability in the market place or entering a tertiary institution to further their studies,” says Genge.

Namedi Secondary is one of eight “no-fee paying” schools to be a recipient of the project. The aim of the project, started by SA Consulting Projects (SAC) in 2012, seeks to ensure that learners from indigent schools are given the opportunity to study CAT as part of their curriculum. Candice Kern-Thomas, director at SAC, says that the lack of infrastructure in these schools exacerbates the socio-economic divide in our country.

“Government has done wonderful work in terms of a roll-out of ICT in education in the last few months, however, the tablets that are provided to these schools are not sufficient to enable the schools to facilitate CAT as required by the Department of Basic Education’s computer lab guidelines. This is where the Melisizwe Project fills the gap.”

Namedi’s Computer lab is sponsored by Société Internationale de Télécommunications Aéronautiques (SITA) and this will be the company’s fifth sponsorship in terms of the Melisizwe project. “We can’t depend on government only to solve the crises facing education,” says Kern-Thomas. “It is incumbent on big business, civil society, communities and schools to find solutions.”